Christmas in Madrid: The Christmas Market in the Plaza Mayor

One of the best times of the year to enjoy running in Madrid is at Christmas and not only because of the cooler temperatures which make running in Madrid more enjoyable but also the festive atmosphere that envelopes the entire city.  One of Madrid Running Tours favorite places at this time of year is the Christmas market in the Plaza Mayor. Locals and visitors alike flock not only to buy but stroll among the wooden, toy house-like stalls which sell all kinds of Christmas articles which are waiting for a new owner. Once that’s been done, you can always go to one of the many bars in the adjacent streets and enjoy the traditional bocadillo de calamares with a beer which is even more popular at Christmastime. The Christmas market in the Plaza Mayor is not, however, a tradition that’s been around for a short period of time. As a matter of fact, its origins date back to the 17th century in which Christmas ornaments were sold along with fruit and vegetables. The Christmas market in the Plaza Mayor evolves through time not only in appearance, as we shall see, but also in the wares that it sells and in the way it is regulated. 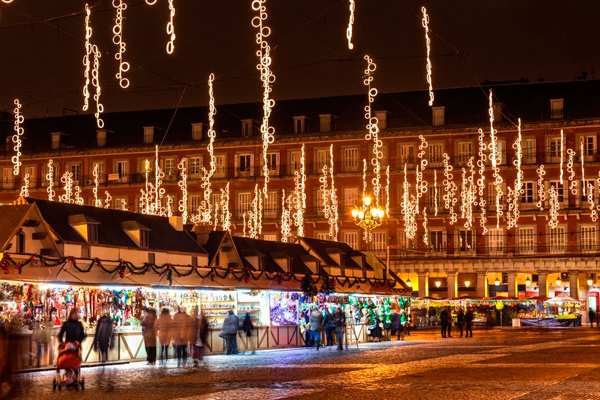 In the 19thcentury a 5 Peseta per square meter tax is applied to the Christmas market vendors of the Plaza Mayor.  One can now also purchase a variety of foodstuffs such as live turkey and chickens in the adjacent streets in addition to marzipan from Toledo and turrón from Alicante among other things. In the 20thcentury, the variety of Christmas items being sold continues expanding. You can now buy figures and moss for the Nativity scene at home (a very Spanish Christmas tradition), mistletoe and Christmas trees (a not so Spanish tradition). Other changes also occur during the 20thcentury: In 1944, the city government of Madrid forbids the sale of food within the Christmas market and in the 1980’s the original stalls which were wooden frames covered by a tarp are substituted by the present-day wooden stalls which provide a more Christmas-like atmosphere to the Plaza Mayor.

Christmas in Madrid is an absolutely wonderful time of year not only to visit but to experience in a variety of ways! Madrid Running Tours loves running in Madrid at Christmas and provides private running tours geared toward your specific needs and requirements. Come and see the Christmas market at the Plaza Mayor of Madrid all lit up at night by running with us on our Madrid At Night running tour and enjoy an unforgettable running experience in Madrid at Christmas!